With the clasp of the cloak removed, the wings spread. A sense of release surged through my whole body. It felt terrible to have one’s own wings binding oneself. Or rather, anyone who enjoyed it must be truly disgusting.

Well, while I was saying this, I was sending everyone around me flying. This was the guy whom Megrez said was manipulating Aries, right?

…Ah, he was one of the Seven Luminaries or something.

“Seven Luminaries… Uh, I never heard of them.”

Dina teleported next to me the moment I finished my sentence.

Hm. Well, it would be really helpful, but has exposition become your hobby recently?

“The Seven Luminaries are the generals among demons. The group was formed eighty years ago. Beside the Demon King and his son, they could be considered to be the most powerful demons today.”

“This is because of the drop in power across the demon race. Although humans lost the war against the demons, the demons were severely weakened as well. Most of the powerful demons died in the war. Otherwise, the world would have been destroyed long ago.”

Ah. I see. I finally understand.

I had been wondering how humans maintained the power balance against the demons. Now that I thought about it, the assumption that demons were as powerful as before was wrong to begin with. There were high-level and mid-level players in this world as well. After that devastating war, it would be weird if the other side remained unhurt.

Hm? Am I the only one left in this world that could oppose the Demon King?

“By the way, Ruphas-sama, aren’t you going for the finishing blow? It looks like you didn’t even kill a single monster.”

“Hm? Oh… About that, I don’t have the interest to kill monsters that were being manipulated. My enemy is still the demon race.”

I said as I shook my finger lightly. Then, the swords that scattered the monsters all over the place suddenly vanished. This was the decomposition of alchemical creations.

“What should we do with these monsters? After losing their master, they should return to the wilds, but then they may start attacking people.”

“I have a solution… Capture!”

I could capture ten monsters in one go. At this rate, I would need to repeat fifty times, but it was worth a try. This was impossible in the game, but the enemy accomplished it as a matter of fact.

That Mars guy should be controlling the monsters with monster tamer skills like me. If he could do it, then I should be able to do the same. Since this was not a game, there would be no excuses like “It would break game balance, so only enemies could use it.”

In other words, these monsters were not considered as individuals, but rather as a group.

Well, it was successful, but what was this?

Was the display bugged? Was it because the individual statuses were different, so it could not be displayed?

It was impossible to tell how strong they were. However, the capture was successful, and I had a sense of control over these monsters. Therefore, I merely had to command them to return to their original locations and not attack people.

I had no intention of bringing them along, as they would attract too much attention.

“Then, you are the only one left—Aries.”

I narrowed my eyes… and turned to Aries, who was staring at me. He had a shocked expression, as if he could not believe what he had seen.

Well~ I could understand his feelings. Someone who died two hundred years ago appeared alive out of nowhere. There would be an urge to say, “You still have the cheek to come back.”

But I just pretended that I didn’t care and came close to Aries.

“Well, Aries. Can you not believe what you are seeing? Or do you suspect I’m merely someone who looks similar?”

Then, what would Aries do? It would be nice if he acted maturely.

If he shouted “Impostor!”, it would be rather troublesome. To be honest, I was not good at convincing others with words. Even if my Intelligence status value was high, that merely represented mnemonic ability and awareness, it did not represent imagination or tactfulness. In other words, although I had photographic memory, it did not make me quick-witted.

Well, personally I had some doubts about whether I was really Ruphas herself. But this body was truly Ruphas, and part of her consciousness remained within. Therefore, I was Ruphas Mafahl. I had no evidence, but something made me feel this way, so I could make this declaration.

“I am indeed Ruphas Mafahl. I’m neither someone who merely looks similar nor a doppelganger, neither an illusion nor a spiritual being. If you still can’t believe it… why not confirm it with your own body?”

I said as I cracked my knuckles. The best evidence to prove Ruphas’ identity was her strength. Facial features, wings, and mannerisms could all be mimicked, but strength alone could not be imitated.

I beckoned Aries with my finger, inviting him over.

“Come at me, Aries. Show me your growth in the past two hundred years. Meanwhile, you could also confirm if I’m truly Ruphas.”

Aries got fired up and gave a cry as if of delight. The air vibrated with his cry, sending goosebumps on one’s skin as a witness to his power. I was not a battle maniac. I never seriously quarreled or raged at another person, and never would. Ah, but what was this anticipation?

Currently, I was definitely anticipating this battle. Since I arrived in this world, this was the first time I truly craved a fight.

Aries lunged suddenly, taking advantage of his weight. Normally, this would be a scary sight, yet I merely smiled. This was like a lost puppy jumping into the embrace of its master… I felt a sense of something like this from Aries. Then, there was only one action to take.

“Hm. You still have not changed your habit of being spoiled after two hundred years. In that case, let me give you a hug.”

I flew into the sky and reached one hand forward. At the same time, I took on Aries’ head-butt, putting considerable stress on my arm. After an explosive sound rang out, my body was pushed backwards. It was impossible to stop the recoil in mid-air with one’s feet. However, the sky was the flügel’s battlefield. I spread my wings and pushed forward, stopping Aries’ attack. Furthermore, I placed both hands on his head and forcefully pushed him back.

This was ridiculous to see a monstrous sheep of over one hundred meters as a fawning puppy. Or was it that a cute puppy remained cute even after it grew into a big dog? Either way, it seemed I just could not dislike him. Even though his form was like this, it was inevitable when skinship was taken to its extreme.

I strengthened my arms and lifted Aries up, as if raising a pet up high and tossing it lightly. The enormous sheep danced in the air before hitting the ground, triggering the largest earthquake for today.

But this was not enough. It wouldn’t end merely with this. Right, Aries?

“Make your next move, Aries. No need to hold back, give it your all.”

As I provoked him, Aries made an indescribable roar. The wool on his body stood on ends. His body was transformed into rainbow-colored flames. This was what threatened Levia previously, his ultimate skill—Mesarthim.

It was easy to defend against it…Well, I would take it head-on here.

This time, I used both hands to suppressed the charging Aries, who had become a raging flame. My palms felt a burning sensation as heat like that of a midsummer assaulted me.

Even though I directly touched this lump of fire, subjectively, it felt merely like the summer’s heat. I deeply understood my own unreasonable abilities. Even so, hot things were still hot. There was almost no damage, but if this persisted, there was the possibility of suffering a heat stroke. In that case, it was better to separate quickly.

I tossed Aries again towards the ground.

If you are finished with all your moves, it’s my turn.

Aries was still shrouded in flames, but it was merely like summer heat to me. There was no feeling of lethargy as one might feel during summer. I was moving normally. In other words, there was practically no effect.

“Oh right… I should pet you a little.”

I flew to the crown of Aries’ head, and proceeded with my “petting”. And so Aries’ head kissed the ground once more, and vigorously bounced back up. I placed my hands beneath Aries’ chin as if stroking it, and jumped up. Then, I flipped Aries over, and stroked his belly. Well, it was stroking, but there was enough force to crush the ground beneath Aries.

“Well, how is it? Can you still now believe me, Aries?”

I asked Aries as he got on his feet. He was groaning softly.

It looks like I need to give him a little more love, huh?

As I thought this, my body received an unexpected charge. Aries’ body suddenly shrank and dashed into my embrace.

I was stunned by the sudden turn of events as…uh, this person, possibly Aries, was hugging me and crying like a baby. He was shorter than me, probably around one hundred fifty-five to one hundred sixty centimeters tall. His long hair reached his waist, and its color… What was this? Its color changed according the degree of one’s perspective.

His limbs were thin, and his body was covered in a white robe. No, when he changed into humanoid form, he was naked. But at the moment of his transformation, Dina teleported behind him and covered him with the robe. Looking over, I saw Dina had a look of self-satisfaction on her face.

You…You are faster than the Twelve Heavenly Stars?

But still, this…Certainly, as I remembered, a monster tamer’s familiar had the personification skill. And indeed, Aries did have a humanoid form.

—Mizar once said, “Traps are popular nowadays.” As a result, I subconsciously designed his appearance to look like a girl as a prank of sorts. Because of this, Aries’ humanoid form became something of a gender fraud. This was a mistake of my past. Damned that Mizar.

By the way, did Aries’ personality change? Where was the earlier sense of intimidation? Or perhaps this was his normal state, and his previous state was abnormal?

In any case, I needed to peel Aries off me…Ugh! His snot was all over me!?

“Ah, seriously. Stop crying, stop crying. It has been two hundred years and you are still a crybaby.”

In the end, I spent over twenty minutes trying to calm this child who wouldn’t stop crying. By the way, Dina got bored after five minutes and left for parts unknown.

Are you really my adviser?! 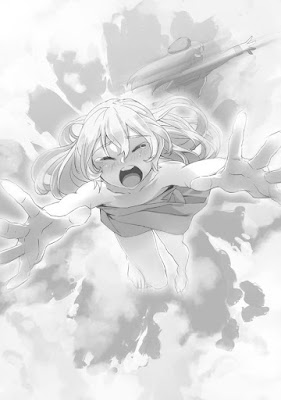