A loud explosion woke me up suddenly from my dream.

Elenore and Tia were also startled. I look outside the window. The scene that I saw left me speachless. The town is on fire. Mazoku were rampaging around. What the hell are demons doing here?

In that moment the slammed opened. It was Helga and Yufi.

“Onee-chan, we have to hurry and escape! I can’t believe this. They found me. They’re after me! If we want to save this town we can only try and run and hope they will follow.”

So they found out about her escape and managed to track her down. Dang. And their level is pretty high and their numbers are great. Even I don’t know if I can fend off so many. Damn it! But there’s no way I’m handing Yufi to them. There’s no way I’m going to lose someone precious to me again.

“Elenore, Tia, go with Helga and Yufi. Help evacuate this place. Protect her no matter what.”

“But… what will you do? Even you can’t possibly think to challenge all of them.”

“Hmph. Don’t underestimate me. I’ll at least keep their attention on me. And you don’t have to worry. Cause this time…”

While speaking I opened my inventory screen. In Astral Storm Online, I hardly ever played at the best of my abilities. I never had to rely on this. But I’m done taking things easily. I selected the items I needed from the inventory. My body was enveloped in a golden light for a few seconds. When the light faded, all the girls mouths went wide opened.

The scenery was dreadful. Demons were marching through the town and killed anyone in their path. The town became painted in blood. The local military force were no match. The level and number difference was too great.

“Kill them all! Let no soul alive!”

Screams echoed. The demons were using mostly heavy weapons like axes, great swords and maces. Various buildings were on fire. It was truly a scene you would expect from a horror movie.

When the demons turned around to see where the voice came from, all they saw were 9 giant fireballs headed towards them. Huge explosions were created, breaking their formation and stopping their advance. 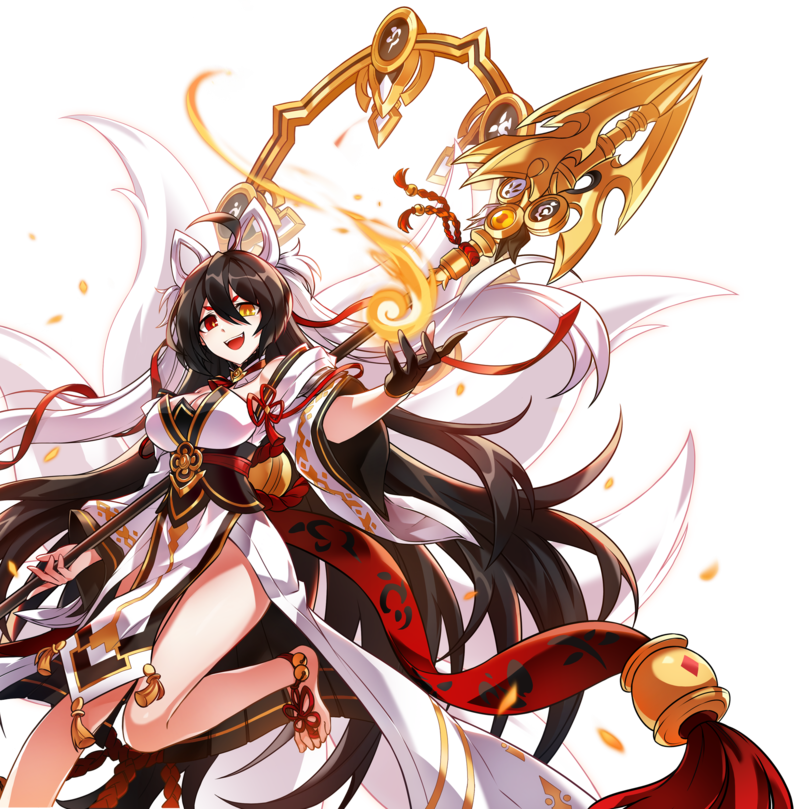 When the smoke cleared, all the demons were staring straight at me. And right now, I was a totally different person. I equipped from my inventory my pride and joy gear. In Astral Storm Online I was known as the F2P Empress. My gear was the farmable legendary set. However, I had another set.

A level 130 5 piece epic set. An epic set is something really time consuming as it generally needs cash shop materials to be crafted. So why was I in the possession of one? Simple. When I felt content with my game progress I offered what you call farming service. There are plenty of nobs that play this game and dump their wallets in it. But most of the time they stumble towards endgame.

So for a nice penny, I carry these geeks. They don’t have to do a thing other than hit the boss once. I did the rest. It was rather tiresome cause at times I even got 3 dead weights in the same party. But the pay was good and it was the reason I could craft this gear. However I never used it for the sole reason that there wasn’t anything challenging enough in the game that required it. But now… this is something worth going all out.

Normally even I can’t take on 5000 alone. However, since we are in a city I might be able to use all the buildings to my advantage.

“I’m somebody you don’t want to mess with. Listen, if you leave now, I’ll spare your lives.”

“Bwah! Don’t get cocky just because of a lucky shot!”

I knew they wouldn’t back down. Here goes then. The greatest battle of my life. I take in a deep breath… and then I charge straight at the horde of demons!

Elenore, Tia, Helga and Yufi were heading towards one of the towns’ exits.

“Seems like Izuna really is drawing all the attention to her.”

“This guy is strong. We might need to work together to get past him. We can do this.”

The scorpion man was level 100. He was a few levels higher than Helga and way stronger than Elenore and Tia.

“Elenore, you and me. Both of us will attack him at the same time. Slow down his movements with your locking skills if he’s too fast. Tia, you are going to attack from behind with your magic arrows. His skin might be though, but try finding a weak spot.”

Helga dashed at the enemy but at the same time she activated a spell that froze the ground suddenly. Because of the slippery ice the scorpion man with it’s multiple legs lost his footing. Seeing this, Helga slidded and landed a big punch, pushing the enemy away.

Not wanting to let go of the momentum, Elenore charged forward with her sword to slice the opponent. However no blood was spilled. His skin was too hard for Elenore to cut.

“Kuh. Such cowardly tactics. Take this!”

He was swinging his tail with his poisonous needle. Elenore was still in mid air, so dodging was difficult. However, Tia’s magic arrows intercepted the needle. When the arrows and needle clashed a small explosion was made giving Elenore time to take some distance.

“I’ll try redirecting this guy’s strength. Match your charge with mine!”

“Don’t think I can’t see through your pesky strategy! First… I’ll take you out!”

The scorpion dashed and completely ignored Elenore and Helga. His target was Tia. A straight line to Tia, the Mazoku closed the gap rather quickly, however Tia was prepared for such an outcome. She pulled the string of her bow and fired a single arrow upwards.

A barrage of magical arrows rained on the scorpion man. For a moment he stopped his advance.

“Kek. This won’t be enough to pierce me.”

“Who says that was my intention?”

The arrow rain also started to crack the ground the scorpion was sitting on. Right now, the road they were standing on was exactly beneath the sewer. Tia wanted the ground to collapse on purpose.

In the next moment Elenore waved her sword and a purple slash hit the Mazoku. Arc Restriction is one the basic holds of the Dark Templar. A purple halo like ring surrounded the scorpion man’s body.

In Astral Storm Online, this was a 3 second hold, but apparently in this world, the effect lasted for 7 seconds. Helga didn’t want to waste that time at all. She jumped and prepared her powerful fists.

Full burst barrage was what you would associate with an Ora Ora type attack. 20 consecutive punches in 3 seconds. The powerful barrage of punches distorted the enemys’ face and due to the tremendous impact of her final fist, he was blown in the ground straight in the sewer. He then was burried by the rubble.

But when Tia turned around, Yufine was nowhere in sight. She wasn’t kidnapped or anything. In the midst of their battle, once she confirmed that the girls could manage to defeat him, she ran straight towards the big explosions that were happening in the center of the town.