『Oh, sorry. This rather spoils the mood. I did not call you here to listen to something like this.』

The crystal glowed softly as he spoke. It was a diamond-shaped object, but strangely, I felt like I could see a rustic dwarf scratching his cheek. Somehow, I knew that he would be doing that if he had a body.

Then again, it didn’t really matter since he would still be indistinguishable from other dwarves. It was the unshaven beard. They all looked the same because of it.

『I think I should tell you about what I know concerning the goddess. Still, it may not be anything new to you.』

Information about the goddess. That was what I currently wanted the most. It was almost certain that Alovenus was behind this series of events, but I couldn’t see what she was trying to achieve. I had a feeling that Dina knew something about this.

『Well, firstly, it’s about the relationship of the demons. As you suspected, the demons and the goddess are connected. The true form of the demons is…』

『What? You already knew? Well, if it is you, it won’t be weird for you to know.』

“Of course. Anyone would have noticed such inferior products.”

I wanted to say that, but Aigokeros seemed to have more to say, so I decided to silently listen for now.

“Arcane magic…is referring to that magic?”

“But the demons are living creatures…”

“They are not. They are magically created phenomena that resemble living creatures.”

As I listened to the conversation between Aigokeros and Aries, I recalled the words of the Demon King. The demons were created by the goddess and would completely vanish when they die. In the past, I had executed demons and put their heads on public display as an example. A normal corpse would remain for some time, but they could not keep their forms and vanish as if they were magical effects. Also, they would become mana after dying, which was the same as arcane magic.

“As arcane magic unleashed to target humanoids…they naturally attack humanoids. It’s the same as fire magic. The released magic would not ask, ‘Why am I attacking that?’ They are the magic released by the goddess to attack the humanoids.”

Hearing Aigokeros’ explanation, Virgo’s face turned blue, while Karkinos gazed up into the sky. Although I had long suspected a connection between the goddess and the demons, I did not expect it to be arcane magic. They were neither creations under orders nor creatures under mental manipulation. The truth was nothing so tepid. The demons were an attack on the humanoids by the goddess.

“There are some exceptions.”

“Is this exception referring to the guy called Terra?”

“That’s right, master. He is indeed arcane magic, but the caster is different. Terra alone is the magic released by the Demon King.”

So demons are arcane magic? I see.

If I had to say, there was a convincing element in this. But it was…just cruel.

“They are arcane magic that are convinced that they have their own wills…but they are just soulless dolls created by the goddess.”

“…They are basically NPCs.”

When I thought of soulless dolls, I would think of NPCs that were prepared by administrators for games. At first glance, they might seem like they were moving by their own volitions, but in fact, there was no souls within them. They were merely dolls that imitated people by moving according to pre-programmed settings. That was the truth of the demons.

Conversely, the people on the streets and the magical beasts that I would normally consider as NPC would not be NPC by the definition of this world. They were not arcane magic but were creatures with their own volitions. If there were people like me who had knowledge of that other world, they might also have defined the demons as NPCs.

『There is one more person who is also a self-conscious magic created by the goddess. I have confirmed his existence after a long period of research.』

Once Aigokeros ended his speech, Mizar took over the topic. I returned my attention to the present and filed the topic of NPC in the back of my mind. Even if I sympathized with them, nothing would change.

『The goddess once intended to make him her agent, but because of his differing opinion concerning the humanoids, he strayed from the goddess. He turned into a fish and fled into the sea.』

“…Such a terrible name.”

There were a lot of terrible names in the world, but Eros was among the worst. What was Alovenus thinking when she named him?

While thinking that, I looked at my comrades and the Twelve Heavenly Stars…Aries, Libra, Aigokeros, and Karkinos had surprised looks on their faces.

“What is that reaction!? It’s Eros! Eros…Isn’t that the real name for Pisces of the Fish!?”

I was stunned by the surprising truth that came from Aries’ mouth. The son of Alovenus was one of my retainers!? Or did I capture the son of the goddess!?

As I thought this was a problem, I was overwhelmed by the consciousness within me. Then, the figure of a blond youth came to mind from a corner of my memories.

…Was he on the brink of tears because he was surrounded by friends who keep calling him, “Eros, Eros”?

Mizar said in shock. Well, I only just found out about it myself.

『Oh, yes. Ruphas. If it’s possible, could you repair the damaged golems and the mass-production model Libras? You could freely use any of the materials available in Blutgang.』

“I don’t mind, but what about those that have fallen apart?”

『The ones that have fallen apart…You can use them to create something else. Just dispose of it. Keep it as your compensation.』

As I accepted Mizar’s request, I suddenly had an idea. How about reusing the parts from the mass-produced golems which have fallen apart to create new armaments for Libra?

The power of a golem was fixed and could not increase. That was common sense and I used to think so as well. But then I thought even if Libra herself could not become stronger, couldn’t she become more powerful by using add-on parts?

For example, if there was a golem with a very offense-oriented status, it would just be a small fry that could not do anything by itself. But if it was reshaped into a weapon for Libra to use, it would increase the actual offensive power of Libra.

“As it happens, there’s something I want to make. Mizar, do you want to collaborate once more? Even if you cannot use alchemy now, you still have your knowledge, right?”

『…Interesting! Your outlandish ideas also surprise me. What have you thought of this time?』

Mizar seemed enthusiastic about my proposal. Then, from now on, it would be time for alchemists. It wouldn’t be fun to watch, so I should let Aries and the others out. That was what I thought, so I ordered everyone to leave. Now, what interesting armaments should we build?

I was really a little tired.

First, I repaired the damaged golems and the three mass production models of Libra. Then, I created an armament using the parts of the destroyed mass production model of Libra. As expected of Mizar’s knowledge, the finished product turned out to be better than I thought. Well, I could not make a definitive conclusion without actually testing it out.

“So then, let’s test its performance.”

The new armament created this time was technically not an equipment. It was a weapon-type golem that had some degrees of autonomy, somewhat similar to Tanaka in some ways. Its biggest feature was that it could be summoned by Libra from anywhere.

Libra and I went outside of Blutgang for the performance test. We confirmed that there was nobody near the target, which was a huge rock about one kilometer away. If we made a mistake and got someone involved, we would be sorry about that.

As Libra shouted aloud, Blutgang’s golem-launch gate opened and a pair of steel wings flew out. The small plane turned in the air and stopped above Libra, transforming into a different shape. At the same time, Libra jumped and a line of red light connected the two. Then, the two golems moved towards each other as if drawn by magnets. The add-on armament named Astraea docked on Libra’s back.

Two cannons were deployed over Libra’s shoulders to face the front. Until now, Libra only had The Right Scale which was mounted on her right arm. But with this armament, her artillery power would be increased threefold.

In addition, two more cannons extended from her waist. Although it was a purely artillery-type attack which had no place in a fantasy setting, the firepower was so strong that it could destroy a fortress in one hit. And finally, the wings of Astraea spread into three pairs of steel wings.

This was the new form of the automatic tracking and slaughter maid—Super Libra. Or perhaps Astra-Libra would be better?

Super Libra converted her right arm into a weapon, aimed her three railguns and two anti-fortress cannons—a total of five cannons—at the rocky mountain, and locked on.

For an instant, my vision turned white. Three rays of light and two artillery shells went in straight lines towards the pitiful mountain.

—A pillar of fire rose towards the sky and everything was incinerated.

Ah, hmm. This is dangerously good.

If Blutgang was struck by this, it would possibly be in danger. Even if it was not completely destroyed in one hit, it would be penetrated catastrophically. I thought it could probably evaporate Levia in one hit.

Well, of course. After all, this was three barrages of The Right Scale (Zubenelgenubi), supplemented by two more artillery strikes. In game terms, this would be considered five combo attacks.

I wondered if Karkinos could endure it. The power level was terrifying. All my companions stared at me with a stunned look. I averted my eyes.

It—It couldn’t be helped…Once a guy started on something like this, he would want to take it as far as possible…This was like the pursuit of romance…

However, I admitted that the firepower was excessive. It could completely wipe out the Seven Luminaries with one attack.

Libra landed on the ground before me and bowed.

“That is an amazing firepower, master. With this power, I could eliminate any enemy.”

“Thank you very much for giving me such an armament. By the way, master.”

Libra looked at me with upturned eyes. Well, since there was not much of a difference in height between me and her, this normally would not happen. Upon closer inspection, it was evident that Libra purposely stood on a ground which was slightly lower than my position. This was clearly a calculated move.

“—Where are the enemies that must be eliminated with this? Or when would we expect to meet them?”

Despite having no emotions, she was clearly anticipating it. Looking at her before me, I decided to seal Astraea. At least, she must not use it without my permission. Although I was the one who made this, she was the type who should not be given more firepower. 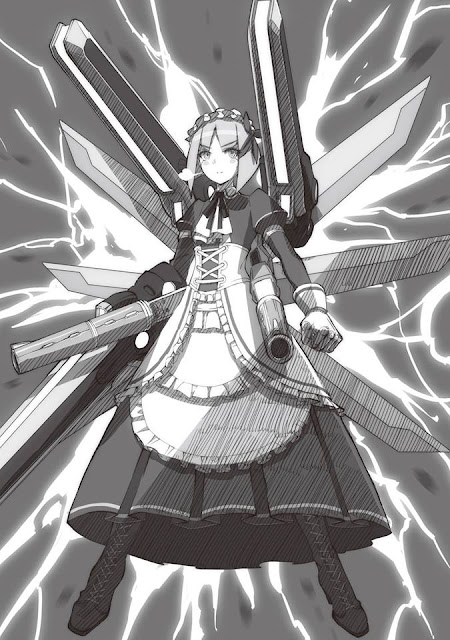