The combat styles of Scorpius and Karkinos could be said to be complete opposites. Scorpius moved around at high speed while making continuous attacks. On the other hand, Karkinos would only counterattack without moving.

I followed the movement of Scorpius with my eyes while keeping Virgo behind me in order to protect her from the shockwaves. This was pretty fast, even when compared to Demon King-san. However, Karkinos did not lose sight of her, properly following her every move. After making several feints, Scorpius attacked Karkinos’ back, but Karkinos caught the attack and countered with Acubens.

“Currently, it seems the bet is on Karkinos-sama.”

“Yes. If it is a frontal collision, Karkinos would have the advantage.”

Realizing her disadvantage, Scorpius increased the distance between them. Karkinos was indeed strong, but his strength was not really in one-versus-one battles, but rather it was in group battles. Serving as a robust shield to protect his allies was his specialty since he was unsuitable for offense.

Therefore, keeping a distance was the correct choice. Given Scorpius’ firepower, if she abruptly attacked without preparing for the counterattack, it would be suicidal. But as if realizing her cautious approach, Karkinos took the initiative to attack.

“Oh. He’s attacking even though he cannot use Acubens while being offensive. He’s making quite a bold move.”

In the game, Acubens was a skill in which the user took a defensive stance and waited for the opponent to attack. In player-versus-player combat, the user must read the movements of the opponent and react immediately after the opponent’s attack ended. As a result, when the user was attacking, Acubens could not be activated. This skill was very powerful, but also difficult to use.

“Ah, well, these movements are fairly common, even though I cannot see it at all…”

Dina and I could follow their movements with our eyes as we watched the fight, but Virgo was different. She was desperately looking back and forth, trying to catch a glimpse of the fight. Currently before us, Karkinos and Scorpius were exchanging hundreds of blows with their scissors-like weapons, but Virgo probably could not see it.

Scorpius had the advantage in terms of power and speed, but Karkinos had his ridiculous hardness. Furthermore, when he read Scorpius’ incoming attack, he would immediately switch to take the stance for using Acubens.

“It was a better fight than I expected.”

It was indeed a good fight. If the fight continued like this, Karkinos would win. But this would not be enough since the battlefield would not continue indefinitely without changing.

“Sorry, but you should sleep a bit.”

And I struck her with the flat of the blade. Although I did not strike her seriously, Scorpius was blown away dramatically and rolled several times on the ground.

…That was weird. Did my attack power increase?

No. It was because I was “remembering” how to use this body. Since the visit to Vanaheim, I became in sync with Ruphas within me. It seemed the sync was not just the consciousness, but the body as well. In any case, my body moved better than ever. I simply accepted this as a result.

“Amazing! As expected of Ruphas-sama, what a brilliant technique! I’m entranced by you!”

“Hmm…Sorry, Karkinos. I interrupted your fight.”

“No problem. To be honest, the victory won’t belong to me if we keep on fighting. Thank you for your nice judgment.”

Watching Karkinos laughed out loud, I also smiled faintly. He was highly tensed, but he was a nice guy. He would not cause unnecessary conflicts with the other Twelve Heavenly Stars and his ability was impeccable. I was really glad to have such a reliable comrade.

The problem was…Scorpius. She was knocked out now, but there was no guarantee that she would not go berserk after waking up. Well then, should I tie her up to restrict her movement while she was unconscious?

As I thought so, I noticed a turbulent pressure from behind. …Did I make a mistake? Despite being high-level, she would not wake up so soon after being struck in the head by surprise.

“Hmm. You are awake? I seem to have underestimated you a bit.”

“Why…Why, Ruphas-sama!? Why do you not understand the passion of this mistress!!!”

Scorpius screamed and her eyes turned red. An ominous pressure surged forth from her entire body. Then, in inverse proportion to it, there was a white glow that had a sense of holiness. It was not arcane power, but rather its opposite. It was the glow of life regarded as a miracle of the divine—divine power.

…No, wait. Scorpius should not be able to use this, wasn’t it?

“Impossible…Divine power? I never knew Scorpius could use divine magic.”

“Do you recognize this?”

This was an incomprehensible view that I had never seen before. However, Karkinos seemed to recognize it. His expression turned grave. When I asked about it, he nodded firmly.

“Yes! Ruphas-sama, this is the same as that time!”

“Have you forgotten? That time two hundred years ago…The same phenomenon happened on the Seven Heroes!”

Hearing these words reminded me of what the Demon King said previously about the unnatural, short-sighted rebellion two hundred years ago. Hiding behind it all was the goddess—the existence that desired conflict. According to Karkinos, the divine power overflowing from Scorpius was the same as back then. Was that how it was? Currently, Scorpius…was being controlled by the goddess?

—At that moment, I “remembered” a scene that I should not know, but yet I most certainly recognized. It was a battlefield. It was in the midst of a fierce battle where I was cornered. These were comrades with whom I once fought alongside and shared my journeys.

I guessed there was something each of them felt towards me (Ruphas). Be it jealousy, fear, or envy…These feelings were amplified unnaturally. The attacking heroes were blessed by the goddess with divine power. After cornering me, their faces distorted with pain. There was no joy despite being on the verge of victory…Tears of blood flowed from the eyes of Alioth who finally defeated me.

—Apparently, it seemed that the memories locked away in my mind were restored by this encounter. It was a very interesting scene, but currently, I needed to deal with Scorpius before me.

While repeating “Why” like a madman, the pressure emitted by Scorpius increased. It was not my imagination. She was actually becoming stronger. As if she was being boosted by someone, she had already exceeded her original status.

This was a common theme in many stories. It was like the hero who refused to give up because of the power of friendship, despite being overwhelmingly inferior to his enemy. Ignoring the power gap between himself and the enemy, he repeated his assaults until finally he turned the situation around and triumphed.

People often called this convenient plot armor, but this was only possible because the author—in other words, God—increased the hero’s power. This situation was probably the same. In this world, only the goddess Alovenus could boost someone by such an unreasonable degree.

…This was the reason Ruphas lost two hundred years ago.

“I see. I heard that Scorpius exceeded her limit to reach Level 900 due to her obsession with me…She must have been dominated by the goddess at that time.”

“Stay back, Dina. Only I can stop that thing.”

I raised the whip sword over my shoulder and confronted Scorpius. Perhaps she did not even know what she was currently doing anymore. She kept repeating “Why”, but it would be meaningless even if I responded. I grinned unexpectedly and advanced towards her.

Honestly, such an intense love. It was so extreme that the goddess was able to use it to get to her, but I still could not mock it. However, there was one thing I could say:

She was my (our)
retainer (thing). You will return her, Alovenus.

I (We) exhaled softly and swung the whip sword down. This distance would not be within reach for a normal sword, but such common sense did not apply to this weapon. The blade stretched like a snake, swelled, and launched towards its prey. Scorpius agilely dodged, but I (we) closed the distance at the same time and kicked her soft belly.

Even while being blown away, Scorpius struck back with her tail. I (We) immediately deflected the attack aimed by my (our) face, but my (our) cheeks were grazed, leaving a trail of blood.

Hmm. Did she manage to wound me (us)? Well, I guessed it was a job well done.

“Yes, that’s a nice attack. I’m going to speed things up a bit.”

I (We) did not get angry for getting hurt, but rather I (we) thought it was somewhat delightful. I (We) felt a deep emotion to see that she had trained herself to this degree. It was a pity that she became a puppet of the goddess, but I (we) could talk to her after she regained her sanity.

Apparently, Scorpius did not seem to be able to distinguish the real sword from the fakes. Her leg was cut deeply and she collapsed on the ground. However, she still did not give up and breathed poisonous fog out towards my (our) eyes.

If the toxic fog hit, it would inflict a deadly poison, but I did not hesitate. While the fog was certainly very powerful, it had the weakness of obscuring the position of her opponent.

Well then, let’s just charge forward! I (We) slashed through the fog and grabbed the head of Scorpius, who had an astonished look on her face. Her head was slammed down onto the ground.

I (We) felt pain from the poison, but it was not enough to kill. Or rather, it was a comforting kind of pain, knowing with my (our) own body the growth of my (our) retainer.

Now then, show me what you would do next. What could you do? It has been two hundred years. You haven’t just been playing, have you? Reveal all your cards and show me your hand.

We finally had our reunion, so please entertain me (us)—

I was heating up…I said to myself until the moment passed. I was barely able to stop myself.

What entertainment? What was the point if I lost sight of the purpose of this battle?

Now that Scorpius had quieted down, it would serve no purpose to continue beating her. Seriously, I wasn’t sure what I was doing anymore. Fighting was the means to an end, not an end in itself.

…Why would one feel pleasure in fighting? …Seriously. 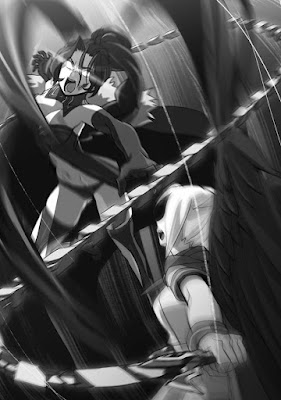