After the fight with the Demon King, Libra and I returned to our original location and pondered the Demon King’s words inside the car. It seemed there was a significant difference between this world and the game. Unknown settings appeared one after another. There was even a theory that the goddess was a villain. It was unbelievable.

However, if one thought about it, this world was rather strange in many ways. This was reality. I was not having a very realistic dream. There would be a limit to a dream’s realism, so this world most definitely existed. Yet this world was strangely influenced by the game, such as status and level being expressed in numerical values.

These could not have been natural phenomena. Such game elements must have been intentionally added by the goddess. Yet this begged the question: Where did these ideas come from? Unless the goddess herself knew about the game and created the world in its likeness, the situation could not be otherwise explained.

So this game existed in the past. After an epic story unfolded, it ended with “This is just a program in the game world.” Yet another virtual world had developed into one where programs lived and monsters evolved. If this was such a world, then…no, impossible.

In that case, it was impossible to explain the difference of this world from X-Gate Online. If this was the virtual world of X-Gate Online, there would not be a time skip of two hundred years. This was because time did not pass within the game. It would be the same during the morning, afternoon, or night. Months and years did not pass.

When I started playing the game, it was Midgard Year 2800. Six years later, it was still Midgard Year 2800 and not 2806. The same year repeated itself indefinitely, just like the world of Sazae-san. However, it was clearly different from the world that I was currently in. Therefore, the hypothesis could not be established.

…No. I still could not understand. There was not enough information. I should have listened to what the Demon King had to say after all. I was so close to getting to the core of this world.

Hearing Dina, I was brought back to reality. Looking out the window, there was a towering mountain with a forest at its foot. It seemed we safely arrived at the location of another member of the Twelve Stars.

Although I was still concerned about what the Demon King said about the world, I could not make sense of it no matter how hard I thought. I guessed I should leave it for the time being. I needed to resolve the problem before me.

Still, this was Parthenos of the Maiden. Dina said that she was alive and well, but was this true? It wasn’t that I doubted her, but it was rather impossible for her to be alive after two hundred years. This was because her race was human.

Previously, I mentioned a tamer could capture an enemy, be it magical beast or human. This was nothing unusual. In most RPGs, humans, such as XX Soldier or XX Priest, generally appeared as monsters.

In the eighth series of a certain RPG, there was a cruel skill called “Eat”, which consumed the target to recover one’s HP. There were cases where players used it on human soldiers. It was horrifying when the main heroine charged towards the human soldiers and was followed by crunching sound effects of her eating.

It was essentially the same thing. Parthenos was originally a human bearing the title of “Maiden Who Serves the Goddess” and was treated as a mob. She appeared in a team with other mobs in a high difficulty dungeon that could only be challenged by Level 1000 players. She would annoyingly provide healing and support from the rear.

As an ally, that support would be very useful. I wanted one too, so I captured her. Although I trained her to some degree, her combat power was fairly weak. After all, she wasn’t meant to fight, but to provide healing and support.

Although she came from a high difficulty dungeon, she was only like an ordinary Level 800 player. In a normal fight, she was definitely the weakest of the Twelve Heavenly Stars. But it was fine for her to be weak. She had a vast amount of SP and very high Intelligence and Mind statuses. She could set up shields and heal from the rear. This alone was already very helpful. Trading blows in the frontline was Leon’s job…Well, I still had not recruited him yet.

Back on topic. Anyway, Parthenos was human, so her lifespan should be short. Even if she survived after two hundred years…well, it was impossible, considering her lifespan. But if she was still alive, she must be very old. I did not think she could endure the hardship of traveling. If I was right, she must be an (elderly) maiden.

For now, we should put an end to the occupation. It was fine even if she could not travel with us. For rearguard, Dina was enough…Otherwise, she might die just from walking.

As we approached the forest, there was indeed a barrier that completely covered it. We did not encounter any enemy, so we reached the center easily. Hmm. It seemed after so long, she was still on our side. In that case, we should not be ambushed here. We were probably recognized as allies.

As I walked through the forest, I realized this place could truly be called a “sanctuary”. Sunlight shone through the gaps between the trees, while animals ran about freely and fearlessly. There were many animals resembling squirrels and rabbits, further strengthening this atmosphere.

Libra did not seem to have any particular emotion, but for a sheep like Aries, this must be a cozy place. As for Aigokeros…He was too out of place, like a violent mismatch with the surroundings. It was too surreal for a goat-headed demon lord to be in a forest where small animals played. Well, it was actually the same for Aries who was over a hundred meters long. But he was a fancy rainbow sheep that just looked big, so it was marginally safe.

After walking for a while, we came to a cabin in the forest. Did Parthenos live here? This region was unapproachable because of Parthenos. Thus, there should be nobody else living here. I stood before the door and knocked lightly.

The sound of a young girl, who was shocked to her core, was heard from within the cabin. On the other side, I was really surprised too. I was certain that an old woman would answer, not a young girl. Perhaps it was Parthenos after all…Maybe she discovered the art of youthful rejuvenation.

After waiting for a while, the door opened gingerly. A young girl’s face appeared in the opening. She was a cute girl with big bright eyes. Her hair was light pink. She was about fifteen years old. But…this child was not Parthenos. As I recalled, Parthenos’ hair was green, not pink. Was it dyed?

As I thought about this, Aigokeros put his hand in the gap of the slightly opened door and forcefully opened it. Then, he reverted to his demonic form for some reasons and stood before the girl with his arms crossed.

“Young woman. You are being rude before our great lady…”

I grabbed the foolish head of Aigokeros and tossed him aside with my arm strength. What should I do now? This was a really bad first impression. Frightened by the demon that suddenly appeared, she backed off quickly. Fear was evident on her face as she stiffened in surprise. A pair of white wings trembled on her back.

Eh? This girl was a flügel?

Then she definitely could not be Parthenos. Parthenos was a human, so she should not have wings. Seriously, who was this child?

“Oh, I’m sorry. My subordinate was rude. I’m not a suspicious person…probably. I do not intend to hurt you. I’m here to look for an acquaintance. Girl, do you know someone named Parthenos?”

Granny, was it? Then, there were two possibilities regarding this girl’s identity.

The first possibility was that she was of Parthenos’ bloodline. It was possible to have a half-breed between humans and flügels. Parthenos might have found a flügel husband and had a child, who in turn had a child. But if this was the case, where was Parthenos’ husband?

The second possibility was that she was adopted. For some reasons, Parthenos picked up this flügel girl and raised her. For now, I should just check her status. If I could confirm her race, it would be easy to determine which possibility was correct.

…She was her adopted granddaughter. There was no “half” prefix before her race, so there was no blood relation. Her level was quite high by the current standard. Perhaps she was trained by Parthenos.

“Oh, those black wings…Are you the Ruphas-san that granny talked about?”

“Yes. My full name is Ruphas Mafahl. Behind me are Aries and Libra of the Twelve Heavenly Stars. The idiot rolling over there is Aigokeros. The one with blue hair is Dina.”

When I introduced them, Libra, Aries, and Dina bowed politely. And the young girl returned the bow accordingly. Hmm. What a nice, polite girl.

…Was I the most impolite person here, by any chance? I couldn’t use honorifics even if I wanted to. The words always came out in a pressuring tone.

“Um, just call me Virgo. Granny would be very happy to know that Ruphas-san is here. If you don’t mind, can you go over to granny’s place?”

“Is that okay? That would be a great help.”

She was not wary of us. What a straightforward child. My face relaxed unconsciously. Maybe she was not so vigilant because of the barrier. As I thought this, Dina pulled on the hem of my clothes.

“Ruphas-sama, this is bad. That girl’s character somewhat overlaps with mine.”

“As it is, my personality will become thinner and less noticeable.”

Talking about a topic like that with such a serious expression, was she an idiot? I ignored the traumatized Dina and followed behind the girl who was leading the way. After that, Libra and Aries followed behind. Aigokeros, who had literally filled his belly with grass, returned to my shadow.

…It seemed this guy really is a goat. Aries, don’t look so jealous. I will give you the corn later.

After walking for tens of minutes, the girl led us to an opening in the forest. Light shone down as if to avoid the trees, adding to the fantastic atmosphere of the forest.

And in the center was a tombstone made of marble.

…The stone was engraved with the name: Parthenos.

“Granny fervently believed in the resurrection of Ruphas-san and lived on with that in mind. But last year, she choked while eating a fruit, then…”

I stared at Dina silently. She turned her gaze away to look at the sky, breaking out in cold sweat.

Hey, what is this…Parthenos, you are dead?! 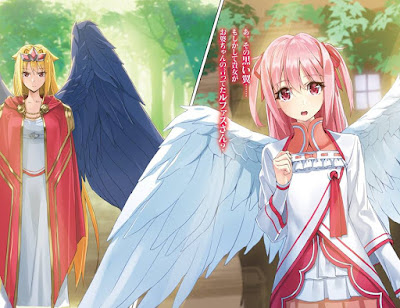