Currently, I’m thinking back on what happened earlier as I fly over to regroup with Dina and the others. Although my memory of what happened after I was beaten to a pulp by Benetnash is kind of vague, I distinctly know that I have defeated Benetnash.

But what was that earlier? Actually, I know what happened. When I was cornered by Benetnash, the real “Ruphas” probably came out and defeated her. I can understand that much.

How should I say this? …For example, if a guy gets drunk and becomes bold enough to do something he normally wouldn’t do, it’s still something he himself did and not the result of a dual personality. It may be a bit confusing, but if I have to forcefully make an analogy, it would be something like this.

At that time, I also pointed at myself and said, “I was asleep.” And more accurately…How do I say this? I remember waking up back then. My consciousness became clear and I felt as if my shackles had been removed. This has happened several times so far. This was particularly noticeable when I was fighting Scorpius. Back then, I was taking pleasure in the fight itself.

Is it assimilation? Or am I being absorbed? In any case, I have changed a lot compared to the moment I came to this world. There was something strange right from the beginning. Even though I lived in the peaceful nation of Japan, it was disconcerting to find myself killing living creatures so easily.

Although I no longer know how many times it has been, I once again feel that my initial thoughts were too naive. I thought I still had some time, but it was ridiculous. Perhaps, from the start…I never had time. If it continues like this, I don’t know what will happen to me when Ruphas fully wakes up.

Will I be assimilated as before? Or will I be completely taken over and disappear? This state is probably not what the Goddess intended. Since she considers Ruphas to be a disturbance, she probably won’t be happy about her awakening. Is this a blunder of the Goddess? She wanted to seal off Ruphas’ strong will, yet she prepared a weak cover like me…If this is true, then the Goddess is too dumb.

Besides, what did I say when I was fighting Benetnash?

Let’s turn the clock back a little.

Acting independently from Ruphas, Aries and the others rode in Tanaka and approached Tyrfing. Although they were concerned about their master, they felt that since it was her, she wouldn’t lose to Benetnash. She had not fought seriously since her return, but that was only because there was no opponent that required her to take things seriously. Therefore, if Ruphas became serious, it would be impossible even for Benetnash to win.

It was exactly because they had absolute trust in her that Aries and the others were able to continue pushing on towards their goal of defeating Leon despite being distracted by what they had left behind.

“We can see it now! It’s that place that’s surrounded by a wall, right?”

“I have detected many biological signatures…They match snakekin, giants, and bugkin…There’s no mistake. This is Tyrfing.”

After seeing a city surrounded by city walls through Tanaka’s window, Aries shouted out. Libra further confirmed it. Tanaka transformed into its flying mode and flew into the sky. They looked down on the streets of Tyrfing from high above.

The fortified city was divided into several districts by walls, separating the areas inhabited by various demi-humans. As a result, the residence of plantkin, such as dryads, was a forest, while the district for merfolks on the other side of the wall had holes filled with sea water.

It was a horrible mess when seen from above. In the city center, there was an unnecessarily large castle that seemed to be showing off its presence. In all likelihood, Leon was in there.

Karkinos looked at everyone and asked. However, Libra and Dina spontaneously waved their hands, rejecting the idea.

“No. The castle may have traps set by Sagittarius. There may be traps in the city too.”

“Well, there’s no need to fight in the enemy’s territory.”

The opposition had Sagittarius, a trap specialist, and he should be expecting their arrival. So was there any need for them to step into his territory? There was no need to step into it if they already knew there would be a trap.

After making that decision, Libra transformed her right arm into a cannon and stepped out of Tanaka. After seeing this, the others realized what she was going to do and moved onto Tanaka’s roof.

“We know where they are, so there’s only one thing to do…That is a preemptive strike!”

Libra aimed the cannon at the castle. In her vision, a red icon marked Leon’s location in the castle. A target lock-on marker was displayed as well as the shot’s accuracy. At the same time, Aigokeros increased his magic power, Dina raised her hands, and Aries created a flame in his hand. Scorpius took a deep breath, while Karkinos just stood there with nothing to do.

A familiar flash of destructive light emitted from Libra’s arm, while a black wave was released from Aigokeros’ hand. Dina’s magic created a massive amount of water which crashed into the castle like a gavel used by a judge. It was a rather big gavel though.

Aries generated and shot a huge fireball, which he named Version 3. It seemed he was aware that it was being used in a way different from its intended purpose. Meanwhile, Scorpius exhaled a poisonous breath called Graffias. The breath system was originally a skill used by dragons, but since she was the queen of poisons, poisonous attacks were her specialty.

On the other hand, Karkinos regretfully had no opportunity to act. His special skill, Acubens, was a counter skill that would activate after he was being attacked, so he must wait for the opponent to attack first. And that was his only offensive skill. If Karkinos could not activate that skill, he could only make normal attacks.

Among his other skills, there was Tegmine which could increase his defenses. When he was incapable of combat, Altarf could be activated to double the damage output of his allies, even breaking through the damage limit.

These were the main skills of Karkinos. It was obvious that none of the skills in his lineup could be used to attack at will. He was definitely excellent as a wall, but he was merely a scarecrow in a situation like this. That was why Crab-san had no role to play now.

While Karkinos was busy being an ornament, the attacks of Libra and the others struck the castle, causing a huge explosion. Fortunately, Dina deployed a shield around the castle, significantly reducing the damage to other parts of the city. However, it was a catastrophe inside the castle itself.

Anyway, this was the first strike. Most of the traps in the castle should have been destroyed. However, the opponent was Leon, the strongest male of the Twelve Heavenly Stars. Such attacks would not be enough to kill him, so everyone began preparing for another attack.

“Fire again. Use long-ranged attacks to shave away Leon’s endurance.”

If he was too proud to come out of his castle, then it was fine. All they had to do was to turn the castle into his grave. Having made such a judgment, Libra aimed once again, but her expression turned grave in the next moment.

“Tsk, he’s coming! Everyone, spread out!”

Libra gave the command and everyone flew away without question. Immediately after, a man jumped out of the castle with tremendous pressure and broke through the roof of Tanaka. However, gravity pulled him down and he landed on the ground.

He was a huge man over two meters tall. He shook his reddish-black mane-like hair and stared at his former comrades with eyes of a carnivore. He was wearing a black skin-tight bodysuit, while his lower half was covered in torn trousers. He raised the edge of his mouth into a smile.

“Yo…Aren’t there a lot of nostalgic faces?”

If he were to be described in as few words as possible, it would be—a mass of muscles. With well-developed biceps, steel-like pectoral muscles, and eight-pack abdominal muscles, he looked significantly different from the good-looking members of the Twelve Heavenly Stars, such as Aries and Karkinos. Although he was not ugly, he was certainly out of place among them. One could say that he was full of manliness, but it was more like the ferocity of a wild beast. Comparatively, the adventurer Jean and the mercenary Gants appeared far more rational.

A centaur with thick facial features, Sagittarius, stood next to him. Just one of them would have been enough, but the two of them together was simply overwhelming. As if saturated with the smell of manly sweat, the place seemed to be filled with masculine odor. Why did Ruphas make Leon’s humanoid form like this? Even though the other Twelve Heavenly Stars were made up of good-looking people, these two seemed to be emanating masculinity in a bad way.

“But…Ruphas didn’t even come…This looks like it’s gonna be a boring fight.”

“Oh, you dare say that? You’re just a traitor!”

Against Leon who spat those words out, Aigokeros became enraged and covered his body with black mana. Despite seeing him transform from an old gentleman into a goat-headed devil, Leon was unmoved. Instead, he seemed to be beckoning Aigokeros to come at him.

Aigokeros charged and punched Leon in the face. The punch’s shockwave blasted the trees behind Leon away. However, Leon did not change his expression, merely staring coldly at Aigokeros without turning his head.

“What is this…? Isn’t this a rather lukewarm punch…? A punch should be thrown like this!”

Roaring, Leon’s punch struck Aigokeros in the face. With that alone, the magical beast known as the Devil King was blown away, crashing through the city wall. His momentum demolished countless buildings as he flew into Tyrfing and vanished.

Agitated that his close friend was struck, Aries jumped and delivered a kick at Leon’s thick neck. Leon evaded it with only a slight movement and readied a punch to counterattack. However, Scorpius was faster, using her hair to wrap around his arm and sealing his movement. Then, the sting at the tip of her tail pierced Leon’s neck and delivered her poison.

“Hahaha. Be more careful, Idiot-san. You should know the effects of this mistress’ Shaula skill. Once poisoned, its effects cannot be removed except by using an elixir or the highest-tier divine magic. It doesn’t matter how strong you are…You are finished.”

Leon laughed and grabbed the hair entwined around his arm. Then, he said as if he wasn’t even affected.

“You’re the idiot! If that’s the case, it’d all be fine if I just kill all ya bastards before the poison fully takes effect!”

He pulled her hair and slammed his fist into Scorpius’ belly. This was followed by the ominous sound of something breaking as fresh blood flowed from Scorpius’ violet lips. As soon as Scorpius was blown away, a crashing sound was heard from a faraway place beyond where the eye could see. Seeing this, Aries couldn’t help but be fearful.

He was truly strong…!

He was unbelievably and simply strong! 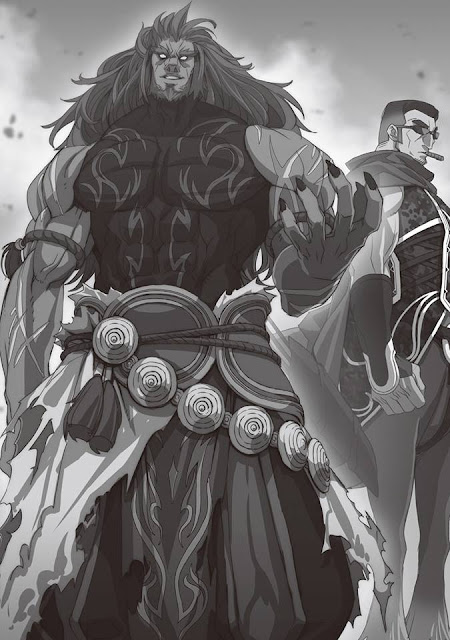