Dang. This thing sure is annoyingly loud. And he definitely doesn’t move like a turtle. I wasn’t flying at full speed but this thing managed to keep up with me. My first goal was to try bringing it to an open field so that I wouldn’t destroy the forest. And I was lucky cause I found a patch of grass near a small lake. It was time to stop running and try beating this thing. I turned around and chanted:

I shot an electrified fireball straight at his head. Since his shell is so hard I thought it would be easier to go for his head. But I was wrong. When the smoke cleared his head was still intact. Not even a single scratch. If anything it only pissed the turtle off. It started to shoot various wind orbs from it’s mouth at me. They were coming at lightning speed, but I managed to dodge all of them with paper thin difference.

“You really are sturdy. Well then, let’s kick it up a notch!”

My aura started to unleash and a strong pressure surrounded me. The turtle fired another blast at me but… it didn’t make contact. The turtle was confused. I disappeared into thin air. I actually increased my speed to an absurd amount and got right under it’s belly.

I wrapped my fist in flames and punched him from underneath. A huge shockwave ran across it’s huge body. One punch. 2 punches… with each punch my speed increased. If one were to observe my barage, they probably would see multiple hands punching at the same time. I reached the point were I managed to land 50 punches per second at that speed and intensity the turtle strated to get pushed off the ground.

I was forcing it into the air. With each blow I raised it higher and higher into the sky. Eventually I stopped and flipped it upside down. With both my hands I gathered flames and lightning and gave it one last giant punch to propel it back to the ground. It’s shell became like a meteor falling towards earth. It crashed straight into the lake, evaporating all the water in the blink of an eye.

“Well I have to say, that was more of a workout than I thought.”

Just as I was preparing to head back the smoke cleared and I saw that the shell was still intact. The turtle fully retracted inside. And before I realized it it fired countless orichalcum shards towards me. I was taken aback and took the full impact of all those shards. Some pierced my body completely and made me crash. The huge turtle emerged again and let out another roar.

I was sitting pierced in a pile of crystals and bleeding. I suppose in this form his orichalcum is stronger than my scales. But did it think it won? How naive. A flame tornado swallowed me up and cleared all my wounds. Phoenix Resurrection. Even if I am a dragon now, I never lost my phoenix powers. And this was the first time I had to rely on them since dragon mom gave birth to me. Once again I was standing before the turtle.

“This really is annoying. I guess the only way to actually beat you is hit you with a force so strong that not even orichalcum can whitstand it. So be it then! Sorry mom, but I’m going to use that.”

I raised my hand and reached for the eyepatch on my right eye. Mom gave me this eyepatch to help stabilize my power. A way to control it better. But right now, I didn’t need that sort of thing. I don’t need control. I need to unleash it. I tore it off and the moment I opened my closed eye… it shined brightly.

My left eye had my usual crimson shine. But my right eye… it was emerald green. I don’t know how this works, but it seems my right eye inherited dragon moms’ eye color. So now I was heterochromatic. But that wasn’t the most important thing. Power flowed through my body.

With that sentence I started to morph. My body was changing. I was turning into a dragon. A pressure so huge was released that it even blew away the grass on the plain.

My shout soon started to transform into a dragon roar. My tiny body evolved into a dragon. A western type dragon. Still not as big as mom, but I was now as big as that turtle. I was a pitch black dragon with black claws. My wings were the similar to my old ones but a bit changed thanks to my dragon blood now. A mix of feathers and scales and a sharp spike coming from the bending point. Even if they looked like feathers they were as strong as any other of my scales. I had a pair of horns, that curved almost to a 90 degree angle and were aimed the same direction as my vision and felt like they were burning at the tip. A jewel was visible on my chest, in a similar manner like my old original jewels. 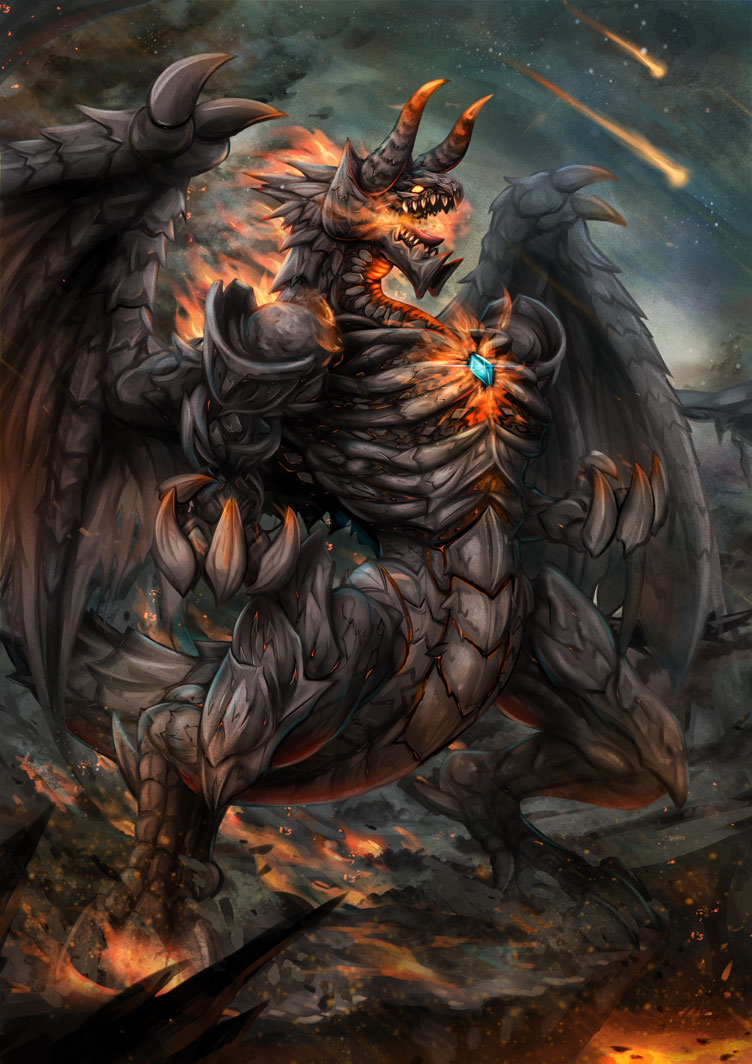 I released a roar 10 times more powerful than the turtle and soared in the sky. The turtle tried firing more crystals at me, but in this form… none of them managed to pierce me. They just made a sharp metal clang and bounced right off. I rushed towards it and bit it on the neck. Blood came gushing out!

Yuck! This is disgusting. How can mom have the stomach for raw meat and blood? I almost wanted to puke. The turtle took a few steps back to gain it’s balance, and quickly withdrew its head into its shell. He probably thought it was safe inside. Even with my claws and fangs I still couldn’t break through the shell. I needed to blast thins thing really hard. So once again I soared in the sky.

3 magic circles were formed in front of my mouth. I opened my jaws wide and a fire energy orb was forming inside.

It wouldn’t be an exaggeration to say that the blast was on the level of a nuclear explosion as it even extended to the forest. Oops. I better put out the fire once the smoke clears. Maybe I overdid it. But regardless it worked. The so called guardian was blast to pieces. Nothing remained except a barren land.

I hope Aria will forgive me for this, but it was necessary. Nevertheless I did it. I managed to stop that giant turtle. Normally I should turn back now but… I better fly back like this. I’m faster and stronger in this form. I gotta make sure that Aria truly was able to handle those guys. And with those words both my crimson and emerald eyes shined strongly and I propelled myself with the speed of a rocket back towards the royal tree.