As the name suggests, Odin extended her hand and a big ice cylinder formed above her head. She violently throwed it at the skeleton standing before her. But he didn’t move. As soon as the pillar touched his black aura it turned into what seemed like small dust particles.

As Odin clenched her tongue, the skeleton raised its hand.

He didn’t chant any spell. He simply fired the dark aura like a beam straight at Odin.

One of Odin’s special abilities. An eastern looking ice dragon formed behind her. Odin’s Nidhogg has the ability to devour magic. So she thought maybe this would work. Maybe it can slow it down. The Nidhogg rapidly ate the jet black aura that was aiming for Odin. At first glance it appeared that it was working. But a few seconds later cracks started to appear on its body. Soon, the ice dragon also disintegrated into dust particles.

“It’s pointless. Everything rots away eventually. Flesh and even magic. The earth… mountains… everything that surrounds us. Nothing can escape the aging process.”

“Then I guess I just have to try harder.”

Death raised his axe and jumped at Odin. She really couldn’t use her Gungnir as it would just suffer the same fate. So instead she used her magic power to create 2 ice swords and intercept the axe.

The swords and axe met. Odin was constantly filling them with mana, but Deaths’ power was eroding them faster than she could maintain them. After a few seconds the ice swords broke, but Odin managed to jump back and avoid the axe’s swing.

Death quickly followed. Odin created sword after sword. As soon as she fended off the axe and the sword would break she would quickly generate a new one. But she was on the defensive. She couldn’t afford a single scratch. After a few more exchanges she managed to put some distance again between them.

“Aren’t you tired of this? It’s pointless. Can’t you see that everything falls before me? You can’t win.”

“There’s still something I can try.”

Odin took a weird stance. The air and ground around her strated to freeze.

“Hou!? I’ve heard of that. Freezing Coffin. It’s a high level spell that freezes your opponent for 1000 years. But it also uses your life force. You’ll shave off 1000 years from your own life. You might die. And I will be free in half an hour at most.”

“That might be just the time we need to come up with a strategy. I will survive. For my onee-chan… I will stop you here. AAAAAA!!!”

As soon as Odin let out that war cry a huge amount of pressure was released in the room. The skeleton slowly started to freeze from his feet.

“Woman, are you really that desperate?”

A voice echoed across the room. As soon as it spoke Odin’s choker started to emit electrical sparks, compelling her to cancel the spell.

“Honestly, I leave you guys alone for a while and you make a big mess. Seriously, you all are hopeless without me.”

As Odin lifted her gaze up towards the stair rail that lead to the first floor she saw her. A red haired loli sitting and looking down. But she couldn’t believe her eyes.

Dang. Odin really was reckless there. If I didn’t hear the fighting and rushed over it might have been too late. I really can’t take my eyes off them. As for Odin’s shock… well… I don’t exactly look like I used to.

For starters my hair was wrapped in a ponytail. Less sand would enter it that way and I don’t need to wash it that often. I had an eye patch over my right eye. My clothes were even more strange. Dragon mom ate me so I needed new clothes. But I had little to choose from. After all, it’s not like lolis would come to a dragons’ cave.

Moving on I had a swimsuit top-like chest piece that was attached with leather straps to a collar around my neck. It felt like a modern push-up bra, honestly. Made my small breasts look a little bigger. The collar had some white fur attached to it. Leather black straps also went across my belly and around my arms. The previous owner must have really been into bondage. Otherwise I really don’t get the point of these clothes. I had a light grey skirt with some sort of lower body protection cloth. If you looked at me you could believe I was wearing 2 skirts. I had a belt that was keeping them together with lots of gold ornaments, a big azure jewl in the center and 4 gold dragon wings that gave the impression that they were coming out of it. And the jewels that were merged with my body disappeared.

I found a pair of black panties. Lucky me. I didn’t have to go commando. As for my boots, they went up to my knees, they were light brown with gold trimming. And the best part about it… they were high heels. I really don’t want to give up heels. I’d be too short without them. So yeah. You can understand why Odin was surprised. I looked quite different. But in my eyes, I’m cute regardless.

“Odin, don’t just stand there like an idiot. Step back. I’ll take over from here.”

“It… really is you… onee-chan! I knew you would find a way!”

I slowly descended from the first floor. The skeleton dude didn’t take his eyes of me.

“It seems the information I was given was false. I’ve been told you were killed, Milla Walpurgis.”

“So? Just because I got killed, doesn’t mean I died.1 As for you… get out of my house.”

“I can’t do that. My mission is to tear this place apart. I would appreciate it if you would withdraw everyone and…”

“Not happening. You hurt my friends and barged into my land. I need to teach you a lesson.”

I took one small step after another.

“Oh? You’re approaching me? When everyone runs in fear and keeps their distance, you are actually coming straight to me?”

“I can’t mop the floor with you unless I get close.”

“Hou! Then by all means, come as close as you want. You’ll make it easier for me.”

I was standing right next to this white cloaked hooded skeleton. He was very confident. Sorry buddy, maybe you think your power is something big, but… against me it’s useless. I clenched my fist and threw a punch at him. He didn’t bother to dodge since he was probably thinking my hand would rot in an instant. But that didn’t happen. He felt the full blow of my punch.

I hit him so hard that I sent him flying outside the castle. Odin couldn’t believe her eyes.

“Onee-chan… how? Even a phoenix’s healing can’t do anything about old age. So how…”

True. But his magic only works if it can bypass your skin. And right now that’s impossible for him.

“Well, Odin, that’s because I’m not a phoenix anymore.

As I said those words, my left arm started to emit a bluish flame. My skin started to turn black. Veins started to pop up and my nails grew into claws. As my hand was morphing, I looked towards Odin and declared the truth. 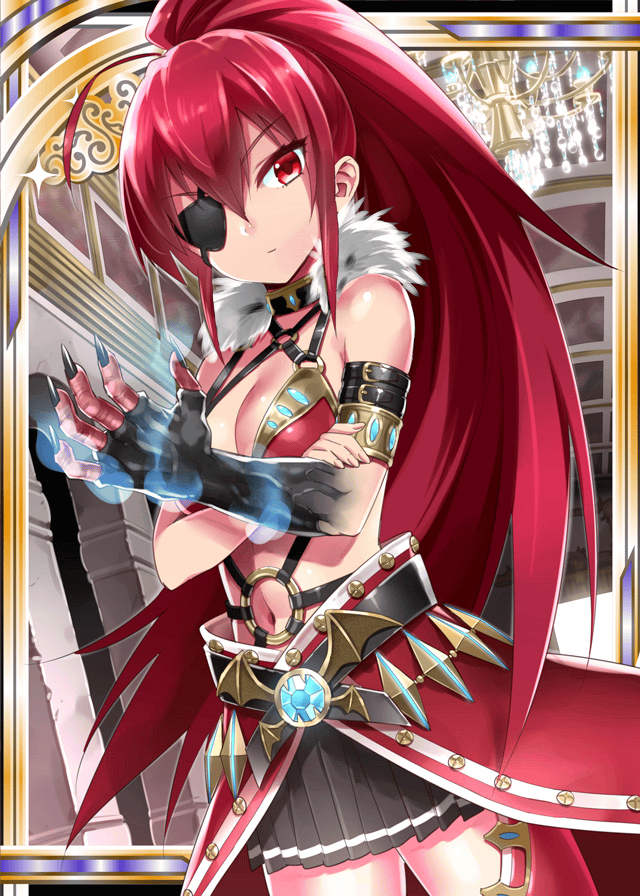