Not good. I’m seriously getting tired here. No matter how many times I kill this sabertooth paladin, he just keeps spawning back. And what’s worse, he just keeps getting stronger. His speed and strength are almost on par with mine now. He doesn’t seem to get tired either.

Even when I try separating that sword from him, it just comes back in his hand. It’s almost like this guy is a jedi knight.

What… what can I do? How am I supposed to beat this thing? I never felt hopeless in any situation. No matter how insane, I always had some kind of plan. But for the first time I don’t know what to do.

I heard the spirits’ voice again. But in the same moment the paladin charged furiously at me. Should I really use Unlimited Sword Strikes? Or maybe Berserker Mode, since that uses life force instead of mana. No, it’s still technically magic so I can’t activate it. Or…

I heard a voice coming from behind me. And I also suddenly felt a monstrous aura. Instinctively I followed it’s advice and crouched down. A fireball was fired from behind. It avoided me by paper thin difference, but it hit the paladin right in the stomach and sent him flying all the way to the other side of this castles’ wall.

“Yare yare. How troublesome. And here I was wondering why the spirits would call for me.”

I turned around. And there, near what seemed to be a staircase is where I saw her. A woman. Not just any woman. A beautiful young girl that let out a cute smile once she saw me. She had long orange hair and orange eyes. Almost the same shade as me when I use One with the Sun. She had a pair of bright red horns. Her ears were similar to elves, but at the same time they also looked like miniature bat wings. Her dress looks almost as fancy as the ones Claire uses. An extravagant red dress with white accents that you see in royalty. Her breasts were covered but even so her chest was big. Her stockings were torn as if coming out of a battle though. She wore beautiful silk gloves that went all the way over her elbow. She also had high heels and a pair of beautiful stockings. And she was carrying a freaking huge sword. A dragon head as its hilt that gave the impression of spitting the blade out. 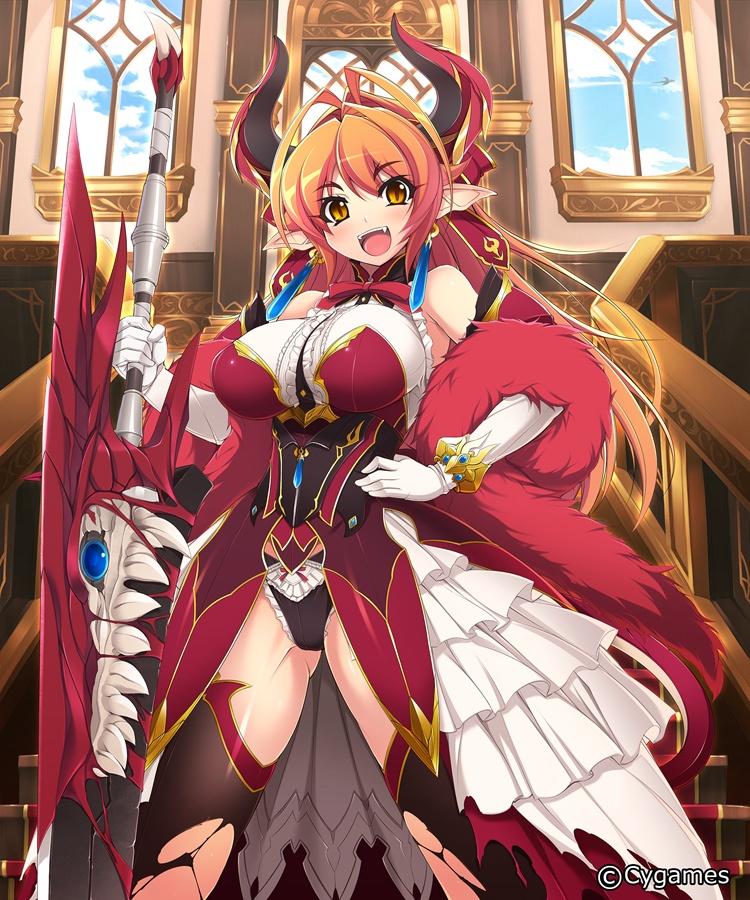 “This brings back so many memories…”

What’s she talking about? I wanted to say something, but I didn’t have time.

The paladin was once again on his feet.

“Hmm? Now this is interesting. You have a really strange power there.”

“Be careful! Killing it only makes it stronger! And that’s a holy sword!”

The sabertooth man jumped and charged at the mysterious woman.

He unleashed a powerful skill, but the woman didn’t dodge at all. A powerful impact was produced. The woman blocked the sword with her index finger.

“Holy sword? Please… this is nothing more than a toothpick.”

Dang. Have I met her before? Something about her feels just so familiar, put I can’t put my finger on it. The woman covers her free hand in a malicious aura and pierces his body.

As soon as she said that, it was like his body was being sucked dry. The dark energy around her hand increased causing an explosion and scattering the paladin, leaving no trace behind.

I quickly looked around left and right in a panicked manner.

“No need to worry. I erased his soul along with his origin. He’s not coming back.”

She takes a few steps closer to me. I can’t help but feel a little regret in her eyes. After scanning me, she starts scratching her head.

“Let me guess. Tenebria put you up to this.”

“Yeah… umm… look, I really appreciate your help but… who are you?”

“Can’t you tell? Well I guess I should do a formal introduction. I am the Dragon Empress, Milla Walpurgis. Ruler of all the Mazoku”

I almost collapsed when I heard that. Things are evolving too fast. I can’t process all this information. Slow down!

“Wait, if you are me then prove it! What number am I thinking of right now between 1 and 1 million!!”

“Firstly… how is that supposed to prove anything? Secondly… you’re not thinking of a number. You’re thinking of b̲o̲o̲b̲s̲ right now.”

“I’m you. The human Ryusei Homura reincarnated as Milla Walpurgis.”

“But I’m a loli and you’re a grown up. You don’t even have my crimson hair and eye.”

“I can understand your confusion. But what can I say. S̲h̲i̲t̲ happens in the future.”

“And seriously, Empress? What happened to Demon King of Insanity?”

“I got a promotion. The whole demon continent is under my command now. And I would appreciate if you stop with the questions already. There’s only so little I can tell you after all.”

O… kay. For now I tried to calm down. I took in deep breaths. For starters, I thought I was going to be a loli forever. Second, I never planned on ruling anything other than my own territory. It doesn’t feel like me at all. Just what the hell happened in the future? I guess for now I should try to stick to the main topic until my brain processes everything.

Talking to… myself… feels weird. I started to explain what happened. How I came here in search for a way to use magic again. She listened and nodded. After I finished she let out a long sigh…

“Tenebria is still as extreme as ever. And these spirits are also quite resourceful. So basically, you want me to teach you how to use the Nightmare Kings’ power.”

“I don’t get it. If you are me, how can you teach me, since I don’t know it from the beginning. Doesn’t that mean you shouldn’t know it either?”

“Seriously!? You want to start a time paradox debate with me? The flow of time is complicated. Just be content that I know.”

“So… are you going to teach me then?”

I almost fell again. What the f̲u̲c̲k̲? I know sometimes I can have a weird sense of humour, but this isn’t the time for jokes.

“Oh my. Did it happen again? Sorry, but I occasionally suffer from short term memory loss.”

“What are you, Dory? I don’t think I’m looking forward to the future anymore. The Nightmare Kings’ power. You said you can teach me.”

“Oh, that. Yes, I can, although I would rather not do it. The Nightmare King is the absolute form of destruction. It’s darkness itself. Casting a spell takes a serious amount of focus. And if by chance you can’t control it, the consequences might be catastrophic. One spell in particular, if you fail to control it will destroy the whole planet.”

“I… don’t think I have much of a choice. The mortals are going to be destroyed anyway if I can’t fight.”

“Very well. Then let’s get started. The amount of time the spirits can keep me here is limited. Now then, listen carefully and then forget everything I will tell you.”

“You don’t have to memorize what I will tell you. Listen, but don’t listen too deeply. Think about it, then immediately forget it. Let it flow in one ear and then let it exit out the other. You’ll know it, but you won’t know it, alright?”