“On behalf of the people of this town, I thank you!”

The female knight was giving me her thanks. My adventurer rank was immediately raised to blue. Normally I should be the highest level. But because this town is small it can’t issue cards above blue. But the most important part was the reward. We got 5000 lila for exterminating the wave. At first I thought it was really low.

I mean, in the game, at endgame we usually talk about millions. But Elenore was ecstatic. It was like she never saw that much amount in her entire life. I’m not sure how the currency in this world works. I think I’ll let fund management to Elenore for now.

“Are you sure we can’t convince you to stay here?”

“Sorry, but we really have plans on going to the royal palace.”

“I see. I guess it’s expected that someone with your strength will become big. But I am glad that I got to know you.”

Eventually we were given supplies, a covered carriage and we could finally continue our journey. On the road Elenore’s mouth started running. She kept praising me over and over. At one point I really was thinking to shut up her mouth with my c̲o̲c̲k̲.

“Seriously, Izuna, you’re simply amazing! You did something that would have taken an army to accomplish. If they ever start telling stories about you, I’m sure they might even compare you with the Warmaster!”

Warmaster? Come to think of it, I think the female knight mentioned something like that too. That isn’t a name I’m familiar with. In other words… it wasn’t something implemented in the game.

“Hey Elenore, who is this Warmaster?”

“You mean you don’t know? It’s the title given to the captain of the imperial knights. The imperial captain. The only other human that did what you did and soloed a wave.”

“Oh? Is there any chance we’ll meet him when we get to the royal palace?”

“First, it’s not a he. It’s a she. The Warmaster is a woman. And second, no. She’s the imperial captain in Zirconia.”

This is interesting. So there’s actually someone here that’s potentially as strong as me. I wonder what kind of person she is?

Zirconia Empire. It is known as the strongest of the human kingdoms because it has the largest and strongest military force. The royal palace appeared more like a fortress than a fantasy castle. In the throne room sat Emperor Randal Zirconia. A man in his late 40’s wearing a dark green tuxedo with a red cape and white ornaments. His rugged beard and mustache hid his wrinkles. You could say that he showed signs of aging early. And a big factor to that is because of stress.

His wife died. His only son is a spoiled 12 year kid. And he managed to build Zirconia Empire by brute strength. Although all the laws and measures taken inside the country offer people safety and are just, he is seen as a tyrant for building his throne on blood. Yet at the same time nobody dares to question him. It was a rule through fear.

Talking ill about the Emperor on the streets would get your hand chopped off. The Emperor had the military on his side. But the reason why the Emperor was favored by the military was non other than the Warmaster.

In the throne room, the doors opened wide. The silhouette of a beautiful woman could be seen. Step after step she got closer to the emperor. She had a green cape with red color on the inside hanging from one side of her shoulder. She didn’t wear armor. She was wearing a fancy red military uniform that exposed her chest area. Around her waist she had a gold belt with various jewels. She had military decorations on her shoulders and was wearing white silk gloves.

She had pale grey eyes and her long silver-grey hair reached all the way to her knees. Her black skirt was complemented by beautiful dark stockings with gold fasteners. And around her waist she had a magnificent rapier holstered in a beautiful sheath to match. 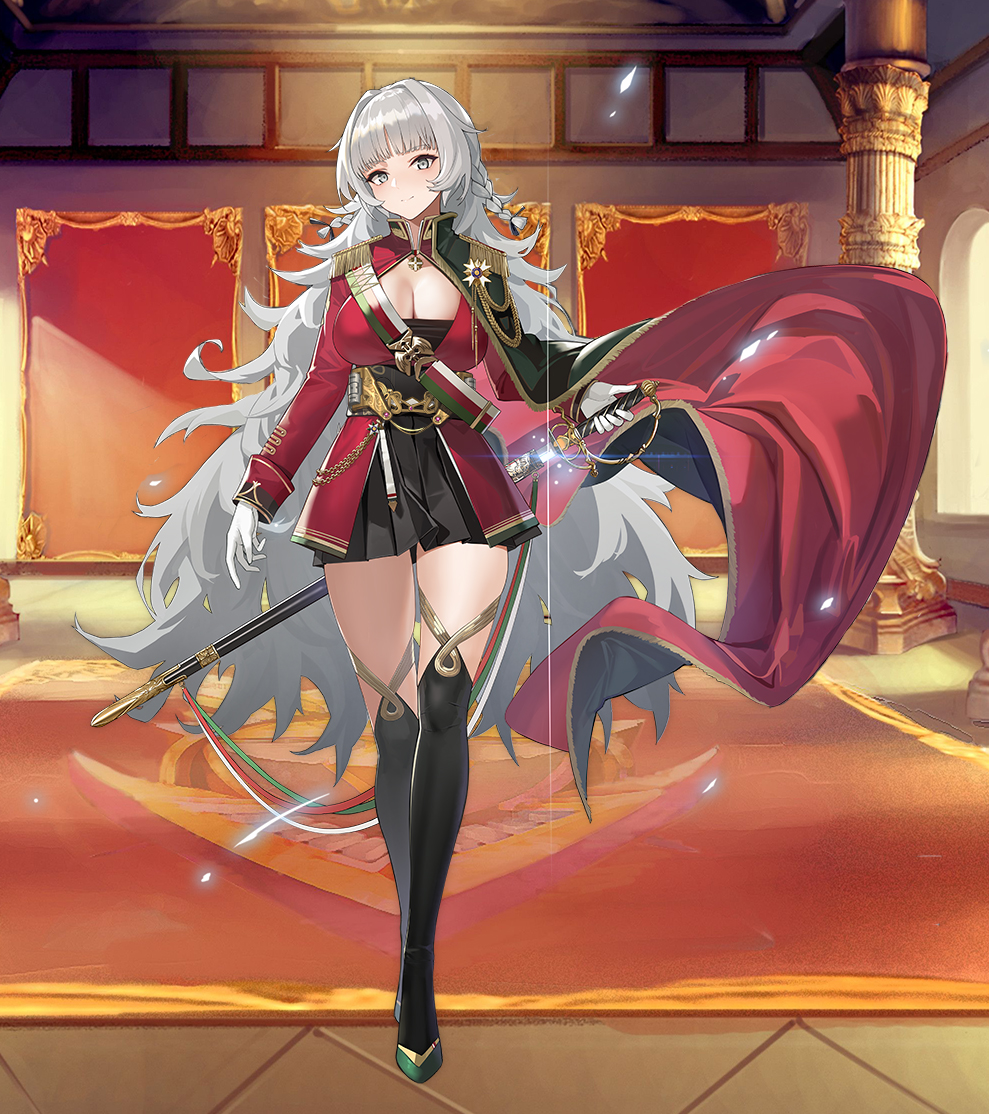 When she finally arrived near the Emperor she kneeled before him. Her face was dignified. To the point that it was almost as cold as ice.

“So you have returned, my dear, Edelweiss. I’m glad to see you are safe!”

“Your Majesty, please don’t waste your praise. I am but your humble sword. A tool does not deserve such kind words.”

Her gaze was fixed on the ground. At one point people even started to think that she was a doll, incapable of emotions. But the only times she actually smiled were on the battlefield. The adrenaline and thrill of a battle were the only things that could trigger her emotions to surface.

“So how was your campaign in the mountains?”

A big portion of Zirconia’s land was covered by mountains. In fact some say that the mountains near the border with Magnolia are the only reason that Zirconia didn’t try to launch an invasion.

“It was a success. All the high grade monsters that were terrorizing the villages have been slayed by my sword. You will have a written report by tomorrow morning.”

“Excellent. You should probably get some rest now.”

“Rest is not needed. I await your next command.”

“Come now, imperial captain! Even a sword will eventually rust if it’s not properly maintained. You really should take a few days off for now and try to rest. I’ll establish your next assignment by then.”

“As you wish, Your Majesty.”

The young woman stood up and excused herself. After she closed the doors behind her the Emperor took a deep breath and exhaled as if he was relieved.

“Ugh. I’m always tensed when I talk to her. I can only imagine what she would do to an enemy. It’s not an exaggeration to say that she built this empire for me. I’m glad I picked her off the streets and induced that loyalty training in her. She’s the perfect killing machine. A soldier doesn’t need to think after all. He just needs to follow orders. I don’t know what’s going on in that head off hers but I’m glad she’s on my side.”

Just what exactly happened to the Warmaster? What part of her past turned her into an ice cold killing machine? To find out, a story that happened 20 years ago must be told.